Baseball on the mind... and the respect shown within it

I totally have baseball on the brain today, having attended the debut of the new "hottest" pitcher in baseball last night.  My buddy Matt chronicles some thoughts on the game itself, but my mind is on something that happens at every game that I thought was culturally significant. 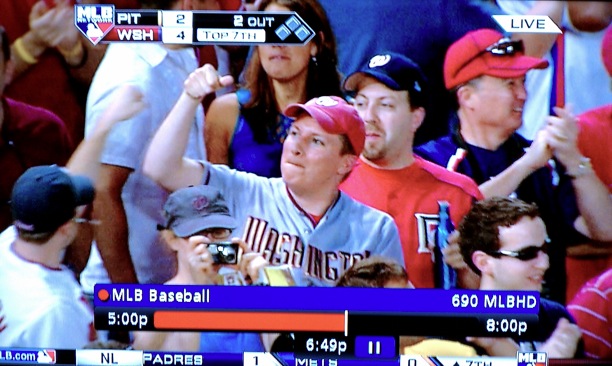 It's more significant in Washington, as the nation's capital, but every game, usually around the third inning in the game, the team calls attention to the wounded soldiers from Walter Reed who are in attendance.  Every game, the Nats bring over some of our injured to give them the night out, and the scoreboard shows "Welcome Home!".  And without fail, the stadium stands and applauds.  For me, this is just part of what's traditional at a game.   These are our soldiers, and they're to be respected.

This isn't the case everywhere in the world.  I was on a trip to the UK last year, and attended a rugby match with some good friends there.    Lots of British soldiers in attendance... and the crowd interaction was different.   The soldiers were simply more members of the crowd, bantering with those in attendance.  At one point, a group of spectators heckled the soldiers, who responded in turn with their own retorts back. The dynamic was very different than I'm used to.   I had some discussions with my British friends about it, who noted it was simply the way things were.  They didn't think anything of it.  Soldiers were just regular people.

I really enjoy the opportunities I get to travel and meet people from all around the world.   Differences are what makes us all great, and the ability to learn from those differences is key.  Certain things, however, always make you proud to be from your country. The respect we show for our armed forces her in the States... it makes me proud to be an American.