I started the car search today with two test drives.   I stopped off at Audi of Tyson's Corner.   Amusingly, the moment I parked, a salesman swooped in on me.   I told him I had never looked at Audi before, so wanted to look at some cars, noting the A3, A4, S3 and S5 as ones to start with.
He led me around the lot, and frankly wasn't that great - he pointed me at specific (used) cars on the lot, walking me around, but ultimately not answering my questions well.  The 2013 S5 he showed me - but I didn't drive - was closest to what I might like.  After a stop inside at the computer to look at stock, when I started asking about leases, he finally took me to the new car sales people - and I realized he was a used sales person, and couldn't do the new ones.   (A frustrating note - I wanted to see cars, and he was fixated on price, using high end ones to discover my limits.   I didn't like him much)
Thankfully, my new sales person was much better.   After a bit of discussion, we got to a bit of a comparison - I would compare an A5 and a S3.
I drove the A5 first.    After a briefing on the tech, I took it out for a spin.   It did feel tight in driving it, with good acceleration.   The accelerator felt like it had between 3 and 4 speeds.   The dash was impressive - felt like a hi tech car should.   It's notable that the roof doesn't open, just pops up. 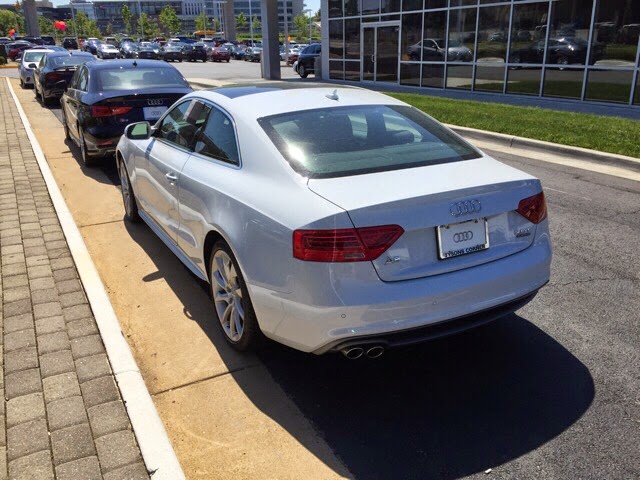 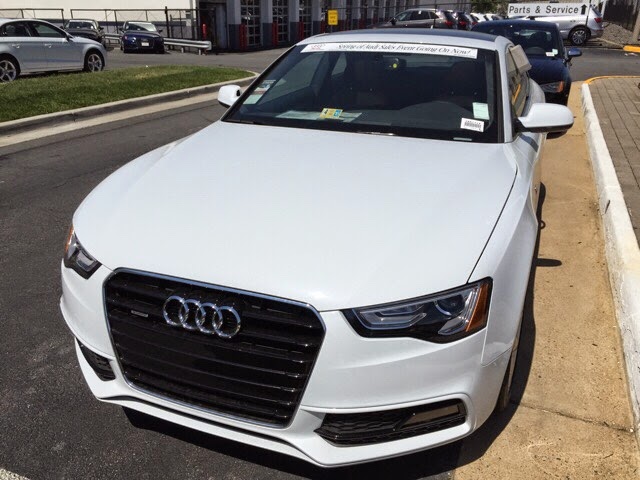 Next, the S3.   Very similar tech, but the dash is totally different.   A pop up display, and circular vents made it look rather like a classic Mustang interior with a screen bolted in.   This sucker took off - I could tell the engine had that 70+ more horsepower, and the options for controls (comfort versus dynamic) made the steering and control a lot different. 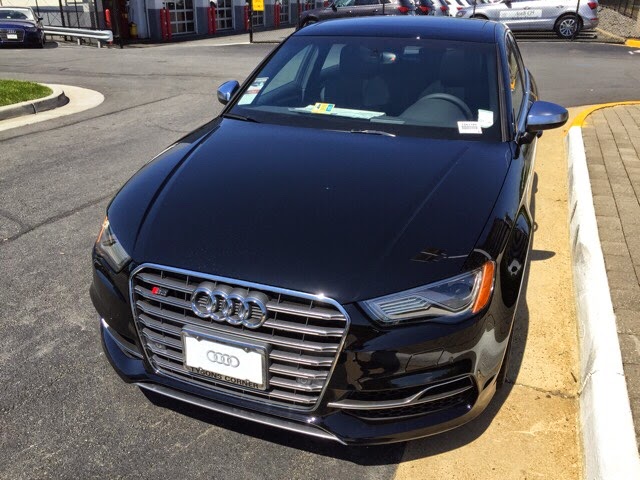 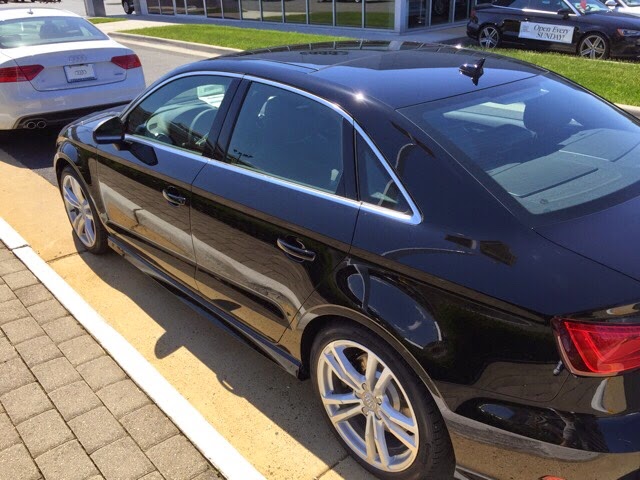 Comparable prices.   My ideal lease payment is $400/month with 10k in miles, and I suspect I can get the S3 in this.  It was Memorial Day, and so they were looking to make a deal, but knew we were a bit off.   Super kudos to my sales guy, AJ Pinnamraju, who was not high pressure here.   We discussed what I wanted, my timeline, the fact I wanted to compare, and while he distinctly tried to get something going, was very reasonable about the process and next steps.   He clearly redeemed the first guy, and the dealership.
S3 preferred on these, and it feels better and cooler and more tech than the Acura TLX I drove back in January.   The A5 is nice, but not nearly as much fun.
Both have nice tech packages - I'm amused by Audi Connect, which apparently makes the car a hot spot.   Apparently it's 4G LTE - powered by AT&T.   I wonder if I can use my T-Mobile plan.   Worth understanding more here.  Streaming music this way is super cool.   I love the idea of streaming from my car rather than my iPhone.
Pending my schedule, BMW next.
at May 24, 2015 No comments:

I’ve started a bit of a car search, and I turned to the interwebs to do the search.   Amusingly, my efforts produced quite a starting list of vehicles.     Based on the response on Facebook, I’m going to try and do some blogs on it.

The basic premise is this.   I have 4 more payments on my lease of a 2013 Acura ILX, a car which I’m not particularly pleased with.  After owning a 2005 Acura TL and then a 2010 Acura TSX, both of which I liked, the ILX is underpowered and feels cheap.   I’m determined to do better this time around, and so I’m being much more deliberate in my search.

Scott Lepre messaged me after my Facebook post, and asked some very reasonable questions.  Here’s his questions — and my answers.

1. What's most important: power (ie, speed, accleration) or handing/feel. There are many options for power but "feel" is something you really only appreciate once you've had a car with it.

Tough question!   I think I’d have to say feel, although it’s been a while since i had that.   One of my measurements of fun of a car is that moment when you’re at a stop light — does the accelerator cause the vehicle to take off, or is there a delay?  Does the accelerator have more than two modes — moving and really moving — which is what the ILX has, or do I feel like I can precisely control the acceleration, the way I could with the TL or the TSX.

2. Do you care about all wheel drive vs. front or real wheel drive. I always like awd but it does limit your choices. I also need to be able to get to work regardless of snow so I need awd.

I’ve never had AWD. I don’t care about weather that much — if it’s snowy and I don’t want to go out, I won’t. I work from home, so this isn’t a “need to get to the office” or “need to get the kids” kind of car. If it’s nasty out, I stay home. I want the car to handle well, and if AWD gets me that, great, else, well, whatever is most fun.

Not really. My family is Sharon, myself, and our two cats. In my ILX, I can likely count on one (maybe two) hands the number of times I need the back seats for passengers. It needs to fit Sharon and I and a weekend of luggage, or my own bags for a week or two of travel to the airport, and that’s probably it.

4. What is your target price range?

Ah, price. I actually don’t look at cars as a “how much am I paying for the vehicle”. I look at how much the monthly payment is, and does it get what I want. I paid $425 a month for the TL. I paid $452 a month for the TSX. I pay $395 a month for the ILX. I anticipate I could probably put down about $3K or $4K for my new lease, and I’d like to keep the monthly payments the same. Or, I could always buy the car and get a 1.99% type APR, but I anticipate I’m going to want a new one in about 3 years anyway (the Tesla Model III comes out then!), so I’d be selling it at that point, so the goal is enough value in the car to get rid of it then. Thus, the goal isn’t price as much as monthly budget. From basic research, without looking at a specific price, it seems that cars in the $35K - $45K are all doable on a lease of about $400/$450 a month. I’m happier at $400, slightly less at $450, but we’re looking to land in this range.

Lincoln MKS - just don't like the look.
Chevy Volt -- look, plus if I'm doing electric, I'm going to buy a Tesla.  I’d need to do an electric hookup at the house, which isn’t standard on the townhouse, and so that’s a fight for another year.

I'm also eliminating the Hot Hatch category, more just because while I get it, I'm not a huge fan. The Mini Cooper, Volkswagan MKVII GTI and Ford Focus ST Ecoboost are all nice vehicles, but just not for me.

The target is to get the new vehicle around late July / August, and I figure considering how much research and test drives I have to do, I’m going to need the time.   Finance deals from the dealer matter — if they make it easier, that’s an influence.  While my lease expires in August, Virginia state law says I can go month-to-month for up to two years, so I’m not under time pressure.

I’m currently thinking I’ll blog it all — why not!

Last night, Sharon and I tried out our first virtual party.    Anyone that knows us is well aware we like socializing, and we often act as c... 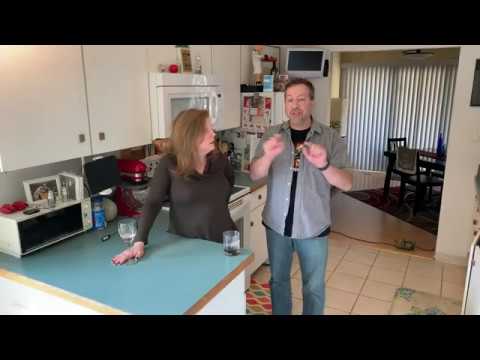