Being back in town, I figured I had a chance to do another round of testing.   Watson and I are going to catch a movie in Tyson's, so I thought I would do Audi round two and try the S4 and S5, but they are only open until 8, and with the movie at 9:50, I didn't want to just sit around for that long.  BMW of Fairfax is right near the house, so I figured I would give it a whirl.

Asad Khan met me in the building to give me the overview.  As I'm not at all an expert in all things Beemer, I did start with my interest in trying a 235 or a 435.   After a bit of discussion, however, and with the availability there, he offered up a 428 that was sitting in the parking lot for a test drive. 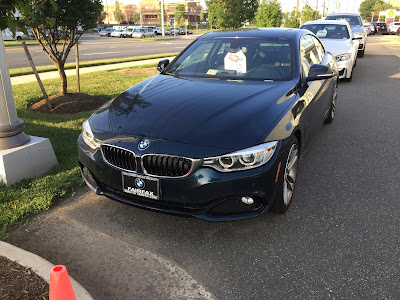 Playing in the parking lot, my first reaction was that the BMW user interface is rather complicated.   (What is it with car makers and bad UI?)   Then I drove it.

I played a bit in comfort mode, but then took it out in Sport. It's TIGHT.   The car felt a lot better than the S3 I drove, and as he listed certain things about the tech package, the only thing that the Audi had that this didn't was the WiFi Hotspot, and some of the app integration (including Spotify) sounds better.   (Of course, I'd need to pair it and actually try my own phone.  Perhaps round two).

The heads up display in the car is quite nice (although my polarized sunglasses neutralize it in the day), and as I settled in, the car was a lot more fun to drive. 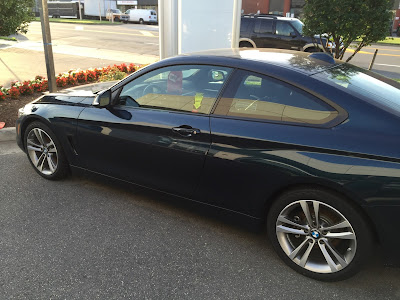 It's a fun, tight ride.  Apparently, the 228 would be the same engine, but slightly smaller.  I performed the "Sharon test" -- sitting in the back seat -- and decided the 228 has enough space.