Car bought! The decision, the why, the rundown...

Pleased to report that I'm now the proud owner of a BMW 228i. 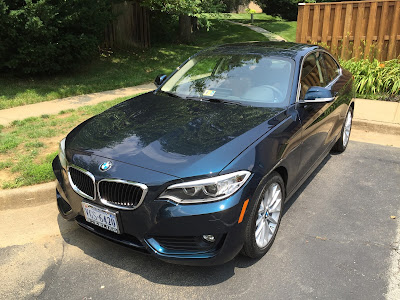 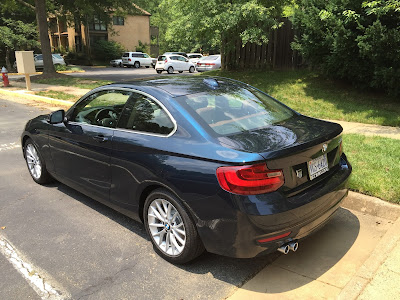 The car is a blast to drive.    The engine just goes, and having an 8 speed transmission, even better.   It has a couple of weird things I wish you could fix -- I like the "Sport" driving setting a lot better, but you can't set the car to default that way.  It always starts in comfort.  It has a couple of quirks about working with Apple Music on iOS8, but only Tesla really seems to have that software side right with the over the air updates to keep pace.   I still can't get Google Maps to send a location to the car, and I find that ConnectedDrive isn't quite as responsive as I might like when querying from the app (and this might be related to response time), but those are minor details.     Still need to get my vanity plates swapped with the Acura.

So how did we get here?

Let's break down the cars I drove, comparing now.  I'll start with the Lexus RC 350.   A very powerful engine, a feel like a jet fighter, it's a nice car.   I had a feeling Sharon wouldn't like the way it sat as a passenger, but more importantly, it felt like my "price range" excluded a few things.  Premium audio only comes in the Sport model, jumping the price up a lot, and while a minor detail, the fact you can't enter a GPS address while driving is a massive source of annoyance.   So a car where I would KNOW the audio could have been better that has something that would annoy me every time I used it... yeah, sorry, Lexus, you got nixed.

Onto Audi.  AJ at Audi of Tyson's corner is a fantastic sales person -- I can't say enough nice things about him.     Just the right balance of pushing and being easy going,  I really wanted to give him (personally) the business.   The cars are where it failed.    While the 228 I bought and the A3 actually compare, the A3 didn't blow me away.   The A5 was a "sedan", and didn't have that fun factor.  Trying the S models, the S3 had some roughness to it -- whether it was my driving or the car I don't know, but it stuck with me.  The S4 was nice -- but by the time we're at that car, we're in a whole other price point.     Was the S4 I liked worth THAT much more than the 228 which I also liked?  No, it wasn't.

I had originally planned to see the Mustang and drive the Mercedes C-class.   Here's why I didn't.

As for Mercedes, while interesting, I couldn't get a configuration that seemed right in a car with the price balance I wanted.   Because I had a car I liked -- the 228 -- it was baselining against it saying "would this car be better", and I didn't see one that was jumping out to me.

After my visit to BMW of Sterling and the post that went online, I heard back from the Sales Manager the next day via a phone call.   He was quite emphatic about wanting to win my business.   The call started out a bit odd -- he was very focused on letting me know they had handled the sales rep -- but after some discussion, and my very clear statement that this wasn't about punishment, this was about education, we turned a very good corner.   I won't name names anymore -- I'm going to only dole out praise that way!

He was very diligent about tracking things down -- and very willing to handle my million questions about scenarios for pricing.   I appreciated the patience there.   We found a car in their stock which was nearly what I had dreamed up in my head.    I was initially looking at the M style and some track options, but decided against them due to availability and some thoughtful comments from Scott Lepre.   (He warned about RWD on a car -- when it snows around here, I don't really drive much, and it should be good in most other weather).

So kudos to BMW of Sterling for the catch and recover.   Their finance department rep, Jim, was absolutely fantastic, and there's even someone dedicated to helping you understand the Tech.    Once in the system, it's a great owners experience.  They do car washes on Saturday mornings too.

I'll rant a bit about the way cars are bought.   Dealerships just seem so very much aligned with the way sales were done in the 70's and 80's.   In a world where I can custom order anything online exactly the way I want it and have it delivered to me right away, car dealerships have this massive pile of cars where they guess the popular configurations and try and keep some in stock.   Ordering a car is more expensive and the system isn't designed to flex to that -- I give some specs, and the dealerships work to try and find something in stock near by (or that they have) that is close enough, so you compromise some of what you want

Yes, cars take longer to build.   But the system doesn't encourage you to customize - it actually encourages you to compromise, because the financials behind it point you that way.   The sales system is designed to push you to that, selling existing stock and not encouraging orders.  It's a shame, and different from the rest of the way sales are done these days.

One other piece of praise.   The internet team at BMW of Alexandria was stellar.   While I was discussing with Sterling, they were also searching for cars that met my specs.    The team there was just outstanding, looking for exactly the car I wanted. I never even went in there, but they made an impression.  They didn't win the business, but not because of anything other than a choice about what stock was available.

New car, acquired!   The Acura will get appraised at CarMax, and either sold that way to end the lease, or returned early.   The ILX isn't a bad car, but it's a suped-up Civic, and that's not the kind of car a luxury brand should be.  To be fair, the ILX never broke down, never caused an issue, was totally reliable, was cheap to operate... it just wasn't fun.  The first TL was fun, the TSX was good, but the ILX wasn't.  And I missed the fun of driving... which I seem to have back now.